Sign up to receive our Daily E-Clips on our subscription page.

Arlington Times
Oxford Houses turn addicts’ lives around
Opinion: Programs before, not after, addiction key to stopping it

Everett Herald (subscription required)
Torn to bits and hauled away, the Midas soon will be gone
State has 3 cases of severe lung disease related to vaping
Activists ‘die in’ for action against climate change
Bloomberg: Delta’s CEO expects Boeing will go ahead and build the ‘797’
Editorial: Don’t delay reforms to shore up Social Security

News Tribune (subscription required)
How many self-driving cars are being tested on Washington roads? State doesn’t know
Retired officer who wasn’t allowed to bring his firearm into the Tacoma Dome sues
Hilltop Rite Aid site purchased by nonprofit. Plans fluid, but affordable housing in mix
Editorial: Welcome to Tacoma, KNKX. Mind if we put up our feet?

Puget Sound Business Journal
Bezos and Zuckerberg take their pitches to Washington
Why prescription drugs cost so much more in America
After leading bike share innovation two years ago, Seattle falls behind with scooters
Amazon’s investment in electric delivery vehicles could have a chain reaction
Google touts ‘biggest ever’ wind and solar deals
Reporter’s notebook: This is what the Golden Age of growth in Seattle looks like
Opinion: Seattle’s building boom creates big challenges for small communities

Seattle Times (subscription required)
‘The youth are watching’: Global Climate Strike to draw students, adult allies to Friday demonstrations
Here’s where the Seattle marches will be during Friday’s Global Climate Strike; drivers, take note
Fact check: It isn’t against Washington state law for schools to excuse absences for students participating in the Global Climate Strike
Gov. Inslee urges stronger oversight of Washington’s private psychiatric hospitals
Washington state sues Trump over $89M diverted from Naval Base Kitsap to the border wall
Editorial: Trump’s wall shortchanges military projects — including in Puget Sound
Op-Ed: All refugees, like me, should have a shot at the American dream
Op-Ed: ‘Be the change’ outlook warms hearts — including mine

KOMO4 TV (ABC)
Local students walk out of class for the Global Climate Strike
As many as 60 people exposed to toxic chemicals at Seattle homeless camp, lawsuit claims
End of the road: Viaduct’s last waterfront portion could be gone by Monday
Only overnight shelter in Kitsap Co. to no longer let homeless stay the night

Read more from the AP.

Marijuana banking bill might have easier time passing Senate with these new hemp rules
Measures making it easier for hemp growers to sell their product may be tucked into legislation that would allow banks to conduct business with state-approved marijuana growers and retailers — giving the pot industry a potential boost with a skeptical Senate.

Read more from the Bellingham Herald.

Feds propose major habitat protections for endangered southern resident orcas
U.S. protections for the waters that a group of endangered orcas call home could soon expand beyond the Seattle area to encompass much of the West Coast, from the Canadian border to central California. The National Oceanic and Atmospheric Administration issued a proposal Wednesday to increase the critical habitat designation for southern resident killer whales by more than sevenfold under the Endangered Species Act.

Everett Herald (subscription required)
After a senator’s claim is debunked, a call for an apology (Das, Liias)
WSU Everett grows a bit this fall
Bloomberg: FAA invites other nations to discuss work on grounded 737 Max
Editorial: A new problem with paid signature gathering

News Tribune (subscription required)
OGs see the violence in Tacoma and say enough. ‘Our children are being killed’
Editorial: Naming a bridge for a living person is rare. This giant of Tacoma has earned the tribute

Olympian (subscription required)
With cost of recycling on the rise, Olympia plans to stop curbside collection of glass

Seattle Times (subscription required)
How climate change threatens our health in the Pacific Northwest
WSU Tri-Cities enrollment dips for a second year
Seattle could tax Uber and Lyft rides to fund downtown streetcar, affordable housing
Editorial:  Opioid settlement is not about the money

KUOW FM
What can we do about climate change in the Puget Sound region?

WATCH: Bob’s choice: Why a Seattle man chose death with dignity
Bob Fuller said he chose to die with dignity, because he didn’t want to suffer. Nor did he want others to remember him suffering. “It’s not the way I’ve ever lived my life,” he said. Read and watch more on King5 News

‘The story of America’: Almost 100 immigrants become U.S. citizens in Spokane Valley
Judge Thomas O. Rice’s courtroom wasn’t big enough to contain the almost 100 immigrants becoming U.S. citizens in Spokane Valley on Tuesday, so the new Americans took their oaths of citizenship at the CenterPlace Regional Event Center. As soon as they were done, the room erupted in applause and tiny American flags began to wave, celebrating the new citizens who came to the U.S. from some 40 countries and whose journey to citizenship was completed on Constitution and Citizenship Day. Read more in the Spokesman Review

‘I’m hoping they’re better on the inside’: Thousands line up in Seattle for jobs at Amazon, which has thousands on offer
Everyone from recent college grads to late-career job switchers lined up in South Lake Union to learn about openings at Amazon, which held job fairs in Seattle and five other U.S. cities Tuesday as part of a push to fill some 30,000 positions nationwide, including more than 10,000 locally. Read more in the Seattle Times

The Guardian
How Dollar General Took Over Rural America

New York Times
The Fed Is Poised to Cut Rates Again. Here’s What to Watch.
Trump Defends Plan to Kill California’s Authority to Set Its Own Auto-Emissions Rules

Seattle Times (subscription required)
Westneat: Seattle a model of democracy? Big money is swamping our elections like never before.
Forget about the Cougs and Dawgs: Bellingham is our state’s best college town, according to this list
‘I’m hoping they’re better on the inside’: Thousands line up in Seattle for jobs at Amazon, which has thousands on offer
Durkan administration touts new data on people moving from homelessness into housing
Op-Ed: Unite across the generations to demand bold climate action now

Crosscut
Opinion: In the era of climate disaster, camping with your kid is an act of defiance

Inaction on Kavanaugh allegations reignites political rancor
President Trump is counting on a strong economy to propel him to reelection in 2020, but his signature issue now looks dicey. The economy is slowing down. Manufacturing is in a recession, bankruptcies are rising in farm country, and the trade war is starting to bite businesses and consumers. Read more in the Washington Post 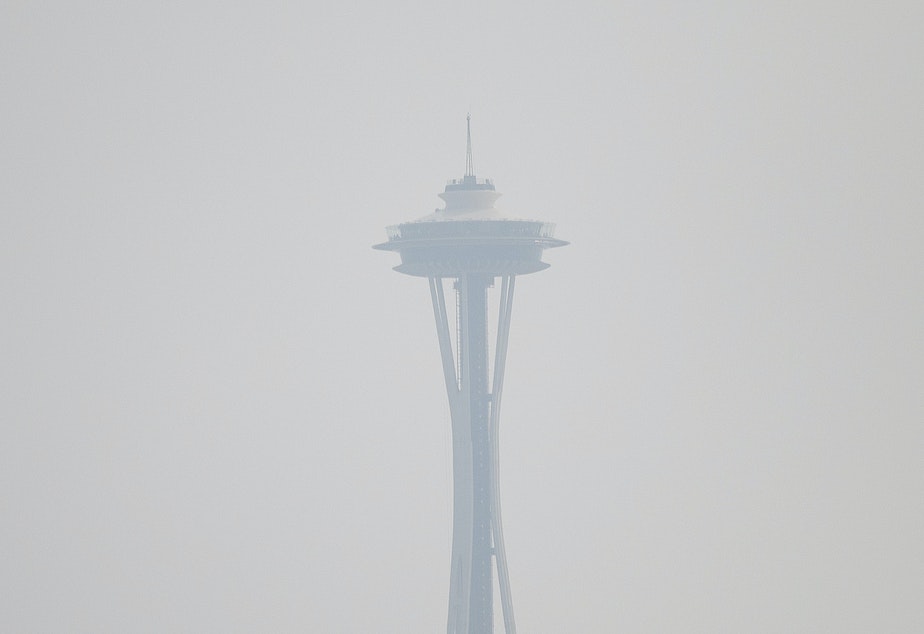 ‘Americans are waking up.’ Two-thirds say climate crisis must be addressed
Two-thirds of Americans believe climate change is either a crisis or a serious problem, with a majority wanting immediate action to address global heating and its damaging consequences, major new polling has found. Read more on KUOW

Crosscut
Thousands of vulnerabilities in Seattle’s IT network attributed to siloed approach to cybersecurity
Saving the ‘missing puzzle piece’ to a world of biodiversity, hidden in grass and sagebrush
Seattle City Council passes new protections for hotel workers over industry objections

Seattle P.I.
As the school year starts up in Seattle, homeless students face anxiety, instability
54,812 people in the Seattle area spent at least 90 minutes getting to work, study finds

Auburn Reporter
Report: Only one use of excessive force upheld by Sheriff’s investigations in 2018
Inslee passes up a chance to confront corporate ‘blackmail’

Bellingham Herald (subscription required)
This is how the state’s new vaccine law is affecting more than 1,000 Whatcom students

The Inlander
Medicare-for-all is not Medicare, and not really for all. So what does it actually mean?

News Tribune (subscription required)
Plans for a second new psychiatric hospital move to Tacoma City Council
How a federal court ruling on Boise’s homeless camping ban has rippled across the West
Violence is wracking Tacoma. It’s on all of us, not just the mayor, to find a way to stop it
Tacoma elementary kids make gains while older students struggle, latest test scores show
Editorial: No, this isn’t a repeat of Tacoma 30 years ago. But violence surge calls for stronger police gang unit

Walla Walla Union Bulletin (subscription required)
Editorial: Statewide test scores for schools are stagnant
Editorial: Hydropower is renewable energy in reality, but not in I-937
(via Seattle Times) Significant work seen as needed for state to hit student testing goal

Washington Post
Most American teens are frightened by climate change, poll finds, and about 1 in 4 are taking action
Purdue Pharma, drugmaker accused of fueling the opioid epidemic, files for bankruptcy
A federal judge vowed to tackle the opioid crisis. Drug companies say that’s a sign of bias.
Saudi Arabia says weapons used to attack its oil facilities were Iranian
Saudi oil attacks could cause U.S. gas prices to rise by 10 to 25 cents a gallon, experts say
Why Iran is getting the blame for an attack on Saudi Arabia claimed by Yemen’s Houthi’s
Trump lashed out at the media for reporting he would meet with Iran with ‘no conditions.’ He’s said as much on camera twice.
Kavanaugh’s confirmation hinged on an FBI investigation that increasingly looks incomplete
Senator told FBI last fall of new information about Kavanaugh

Whidbey News-Times
Main Street petitions to reverse city’s approval of LIHI project
Residents seek class-action lawsuit against Navy over Growlers
Island County cuts off its funding for Spin Cafe
Letter: NAS Whidbey would go on without the Growlers
Letter: Blame for contamination may not be so clear

Q13 TV (Fox)
‘It should be offensive to everyone’: Racist flyers pop up in Seattle’s Columbia City neighborhood
The Divide: East vs. West
Boeing committee expected to make safety recommendations this week